The Good Shepherd Laundry at Sundays Well was established by the Good Shepherd Sisters in 1870. The order ran the institution until its closure in 1977. (Source: McAleese Report)

The grave sites named above have a number of inaccuracies, and the following is what we know thus far. In April 2012 Fiona Ward, a Cork-based volunteer, assisted JFMR (then JFM) in locating the grave at the old Good Shepherd laundry site at Sunday’s Well in Cork.  Ms Ward provided us with a number of photographs, indicating that 30 women and girls are recorded as buried in this grave.  We were concerned by a large gap from 1896 – 1928 during which period there are no names recorded. In May 2012, a JFM representative visited the grave with Ms Ward and discovered that gaining access to the grave was (and still is) an extremely difficult process, involving two steep descents which required ropes, while the entire route was severely overgrown.  The only way to view the grave was by climbing on top of a ten-foot wall (which is covered in razor wire) as all gates were locked.  Flowers which had been brought to lay at the burial ground had to be thrown onto the grave rather than placed there. Of deepest concern was the discovery that the grave had been disturbed and vandalised in the few days that had passed since Ms Sugrue’s first visit and the razor wire moved so that any attempt to get inside the grave area was not possible. 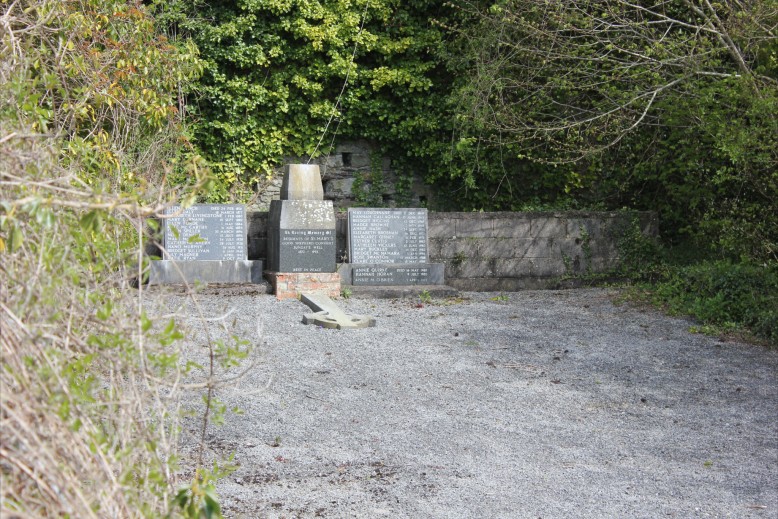 JFM subsequently discovered from survivor testimony that the 30 women buried at Sunday’s Well were ‘auxiliaries’ – women who were promoted in status within the laundry system to help the nuns maintain order on foot of their declared intention to volunteer to spend the rest of their lives in the institution.  With assistance from Ms Ward, it was established that there are at least two other Good Shepherd grave sites at St Joseph’s Cemetery in Cork.  We inserted the names into databases and it became apparent that a similar gap existed between 1891 and 1922.  The analysis also revealed a number of apparent errors, where names are duplicated between graves and it is therefore unclear which grave some women are buried in.  There was also one case where the same (relatively unusual) name is on the grave with two different dates.

As shown in the documentaries CBS 60 Minutes and Les Blanchisseuses de Magdalene, a Sunday’s Well survivor campaigned to have names retrospectively inscribed on the Good Shepherd graves.  It is unclear whether there is another grave location and/or if the Good Shepherd Sisters are no longer in possession of all records for women and girls incarcerated in their institution.  JFM raised these concerns about Sunday’s Well with the McAleese Committee, however Chapter 16 of the McAleese Report ignores these issues completely, making no mention at all of the graves for Sunday’s Well, other than amalgamating them in the statistics.

JFM also brought to the McAleese Committee’s attention one particular case of a woman who is interred in the auxiliaries’ plot at Sunday’s Well. The Irish Times dated 27th April 1932 contains a report concerning Margaret G, described as a ‘young woman’, who was sentenced to twelve months’ imprisonment for the ‘concealment of the birth of her illegitimate child’.  The judge said the sentence ‘would not come into effect of the court to the effect that [sic] she should remain in the Convent of the Good Shepherd, Cork, and be subject to the supervision and direction of the Superioress there for a period of two years’.

A Margaret G is buried in the Good Shepherd grave located at Sunday’s Well in Cork (which is currently inaccessible), having died on 11th February 1978. If the Margaret G referred to in the article is the same woman who is buried at Sunday’s Well, she spent a total of 46 years in Sunday’s Well, 44 years on top of her original sentence for concealing the birth of what was then termed an ‘illegitimate’ child.

JFM asked the McAleese Committee:  a) to ascertain if the Margaret G referred to in the Irish Times article and the woman buried at Sunday’s Well are the same woman; b) if this is the case, to confirm whether the Probation Service followed up to ensure that the Good Shepherds obtained informed consent regarding Margaret’s continued stay at their establishment and c) to confirm when Margaret made her decision and if she would have been considered institutionalised at the time.  The McAleese Committee completely ignored this case in the Report and failed to answer any of the questions raised by JFM.

Following on from JFM’s research, The Irish Examiner newspaper raised the issue of duplications with the Good Shepherd Sisters, however, the order refused to answer any questions on the issue.  It emerged subsequently that the Good Shepherds had amended the gravestone at St. Joseph’s Cemetery, with asterisks noting that three of the women were buried at Sunday’s Well.After the State apology in 2013, a relative of a woman who died at Sunday’s Well discovered that the woman’s name was not recorded on the grave at St. Joseph’s.  The woman’s relative successfully appealed to the Good Shepherd Sisters to have her great aunt’s name put on the headstone.

In early 2017, JFMR became aware of a planned development at the former Magdalene Laundry at Sundays Well. In March 2017, JFMR made a submission to Cork City Council about the development. After deliberating on the issue, Cork City Council informed the developers that they must carry out a geophysical survey in order to identify any unmarked graves at the site. The Council also said that ‘research on  the records of residents of the institution, numbers of recorded deaths and recorded burials including an assessment of the likely occurrence of undocumented burials of children are required in the context of evidence from comparable institutions in Ireland‘.